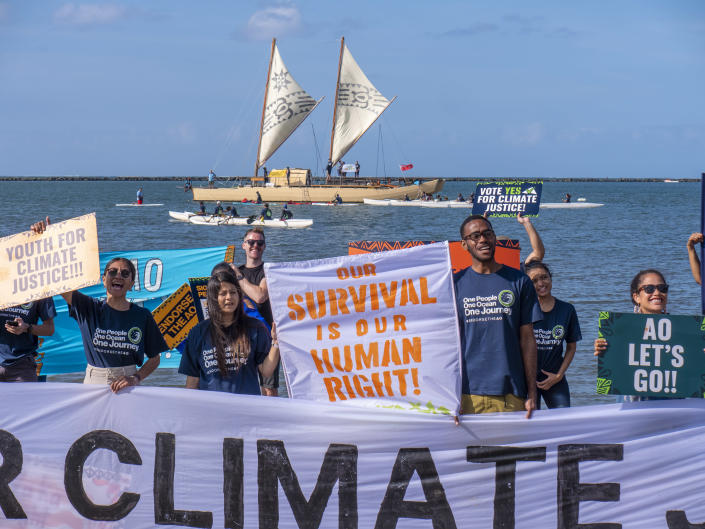 Climate activists call on Pacific Islands leaders to endorse Vanuatu’s push for the International Court of Justice to issue an advisory opinion on climate change in Suva, Fiji on July 9, 2022. Credit – Courtesy of Greenpeace Australia Pacific

Pacific Island leaders have tried almost everything—from giving speeches in knee-deep seawater, to shouting and crying—to draw attention to the impacts of climate change on their nations.

But as their attempts to spark drastic action have been met by slow-moving international climate negotiations and the continued use of fossil fuels, interest in using legal levers to force large polluters to take action—or pay up—has grown.

For nearly a year now, Vanuatu has been trying to build a coalition to get the world’s highest court to issue a legal statement, or an advisory opinion, on climate change. And on Monday, the climate justice movement made important headway when Pacific Island nations threw their weight behind Vanuatu’s efforts. More than a dozen countries and territories in the Pacific region, including Australia and New Zealand, made public their support for the initiative soon after the Pacific Islands Forum meeting in Suva, Fiji, which concluded on July 14.

This comes amid an explosion in domestic litigation over the past few years across the globe, and interest in trying to leverage international courts to address the climate crisis has grown. For example, the Commission of Small Island States (COSIS) on Climate Change and International Law, aims to be the first to bring a case to the U.N. International Tribunal for the Law of the Sea to help determine the obligations of countries under international law and hold polluters accountable. Vanuatu, meanwhile, is hoping it can compel the International Court of Justice (ICJ) to issue an opinion on the obligations countries have to protect the rights of “present and future generations” from the harmful impacts of climate change.

To achieve this, Vanuatu has to get enough United Nations General Assembly (UNGA) members to vote in favor of its idea to compel the ICJ to act. Today’s announcement makes it increasingly likely that Vanuatu may be able to muster enough support to make that happen. While an ICJ opinion isn’t binding, it could go a long way in holding nations accountable for protecting human rights, from the right to food to the right to life itself, which are becoming increasingly vulnerable as climate change worsens.

“This really signals to the whole world that the region that has the most significant moral voice in the climate crisis is demanding an advisory opinion on climate change,” says Vishal Prasad, a campaigner at the Pacific Islands Students Fighting Climate Change (PISFCC), which is advocating for the ICJ advisory opinion. “Hopefully that will signal to the world to listen.”

Here’s what to know about the campaign, and what an advisory opinion on climate change from the ICJ might mean.

The idea to get the International Court of Justice in the Hague to issue an advisory opinion on climate change was conceived in 2019 by more than 20 students at the University of South Pacific in Vanuatu. Bob Loughman, the Prime Minister of the tiny island nation Vanuatu—which is made of some 80 islands stretching across 800 miles of the South Pacific Ocean—announced in September 2021 that he would build a coalition of countries to take the push forward.

The list of countries supporting the movement has been steadily growing. In March, the Caribbean Community (CARICOM), a group of 14 Caribbean nations and dependencies, said they supported Vanuatu. The Organisation of African, Caribbean, and Pacific States, a 79-country bloc, said in June that it endorses Vanuatu’s initiative. And about 1,500 civil society groups also support the campaign, according to Radio New Zealand.

Pacific Island Forum (PIF) members, like Fiji, Palau, Papua New Guinea, and Samoa, endorsed Vanuatu’s push on July 18. So did Australia—one of the world’s largest exporters of fossil fuels—which is trying hard to shore up its relationship with Pacific Island nations as China also courts the region. Not only does that add to the number of countries supporting the initiative, but it also adds a certain moral weight to the initiative.

Climate change has long been a top priority for Pacific Island countries, which are among the world’s most vulnerable places to the impacts of rising global temperatures such as rising sea levels that threaten the existence of some islands, and worsening storms. Vanuatu, for example, has been hit with a devastating string of cyclones in recent years. In 2020, Cyclone Harold, the strongest storm ever recorded in the Southeast Pacific, wiped out homes, schools, medical facilities, and damaged crops. In 2015, Cyclone Pam caused $450 million in economic losses, wiping out 64% of the country’s GDP.

What would an ICJ advisory opinion mean for climate action?

Under the U.N. Charter, the U.N. General Assembly (UNGA) can request the ICJ to give an advisory opinion on any legal question of concern to the international community.

Although advisory opinions aren’t legally binding, the court says they carry “great legal weight and moral authority.” As its website explains: “Advisory opinions also contribute to the clarification and development of international law and thereby to the strengthening of peaceful relations between states.”

“You are essentially first talking about putting human rights at the center of climate change discussions,” says 26-year-old Prasad, who is from Fiji. “When you have the court clarify what the obligations of states are, what the state needs to do at minimum to protect the rights of its people and those to come, it will also help strengthen existing mechanisms and processes that seek to address the climate crisis.”

An advisory opinion could have a big impact on large emitters. Tim Stephens, a professor of international law at the University of Sydney Law School, tells TIME that it’s unlikely that the ICJ would be asked to directly address the responsibility of or liability of large emitter states for climate damage. But, he says, “even if the [ICJ] deals with wider legal issues such as the general obligations of states to protect the rights of future generations against the adverse effects of climate change it will carry implications for all governments … that continue to make a significant contribution to the climate crisis either through their own domestic emissions or to the emissions of other countries as a result of fossil fuel exports.”

But an advisory opinion that strongly says that countries have concrete duties under existing law to take urgent action, or that historic polluters are liable for the loss and damage suffered by the rest of the world could be “a big blow to politics as usual,” says Douglas Guilfoyle, a professor of international law and security at the University of New South Wales’ Canberra campus.

“The battle will ultimately be won or lost at the national level,” he says, but “the ICJ can arm national courts with a powerful precedent they can refer to or draw on to develop their own national law.”

Vanuatu needs a simple majority of members to vote at the UNGA meeting which opens in September, to give the ICJ a mandate to act.

“Nothing is ever certain in a U.N. vote, but I’d be optimistic for Vanuatu’s chances,” says Guilfoyle, pointing out that there are 38 small island developing state members of the U.N. alone, that many sub-saharan African countries are likely interested in the question, and that places like India, which haven’t yet voiced support for the initiative, have suffered severe heat waves in recent months and could potentially be swayed.

It will be important that Vanuatu crafts a question that can attract majority support in the UNGA and which the ICJ can usefully address, says Stephens of the University of Sydney Law School.

“This will be a challenge as any question that involves issues of responsibility or liability is unlikely to receive widespread support,” he says. Wealthy nations have failed to make good on a promise to provide poorer nations $100 billion a year to help them deal with climate change. In June, rich countries blocked the inclusion of “loss and damages”—or, compensation from historically high-emitting countries for the harm caused by the resulting carbon pollution—from the agenda of the COP27 climate meetings in November.

“On the other hand,” says Stephens, “a question that is too broad and general may not give the ICJ an opportunity to make a constructive contribution on this vitally important topic.”

Prasad is hopeful that Monday’s endorsement is an important step forward for the movement, and that it will have global ripple effects. “We’re hoping to see a groundswell of support coming from this announcement,” he says.