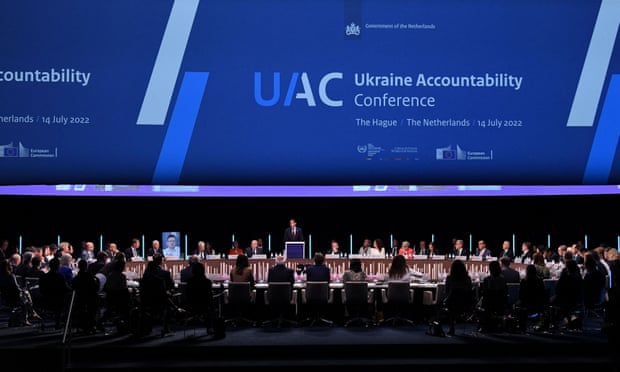 Le titre (Justice should be colour blind. So why is it served for Ukraine but not the Congolese? | Vava Tampa) parle de lui-même.

The head of the World Health Authority, Tedros Adhanom Ghebreyesus, has suggested that racism is partly to blame for the lack of international interest in the conflict in Ethiopia’s Tigray state.

At the Ukraine Accountability Conference in The Hague last month, shortly after Russian missiles struck two Ukrainian community centres, killing three children and 17 adults, the international criminal court’s (ICC) chief prosecutor, Karim Khan, urged world leaders: “In all situations across the world where international crimes are committed, we should feel the same urgency for action and for cooperation.”

For those like me, with friends and loved ones dying amid international indifference, such words offer renewed life to that principal expectation: justice for all – not just for white people.

By the end of The Hague conference, 45 countries – including the US, UK and the EU’s 27-member state – had agreed to investigate Russia’s war crimes in Ukraine, with Dutch foreign minister Wopke Hoekstra calling for the creation of an international war crime tribunal for Ukraine.

The last time we witnessed such enthusiasm for prosecuting international crimes was in the 1990s, after the violence in the former Yugoslavia, which then brought the ICC into being in 2002. That enthusiasm has since dissipated, in part because the ICC has only targeted “anti-western” African leaders while brutal UK- and US-backed leaders in Africa continue to kill and maim with impunity.

Nowhere is this more evident than in the Democratic Republic of the Congo (DRC) where Paul Kagame, president of Rwanda, has been fuelling some of the world’s bloodiest and nastiest killings.

Conflict in the DRC ended in 2002 when Kagame and the Ugandan president, Yoweri Museveni, began withdrawing their troops. But the killings – and the raping, looting and displacement – have not stopped.

In 2003, at the UN general assembly, the then DRC president, Joseph Kabila, called for the creation of an international criminal tribunal for the DRC to hold perpetrators to account. The appeal, echoed by Congolese civil society groups, was ignored, with the UK, US and a host of western governments looking the other way while giving Kagame guns and money to operate as he pleased.

The DRC asked the ICC to investigate that same year. So far it has targeted only “low hanging fruit” including Thomas Lubanga, the ICC’s first ever conviction in March 2012, then Germain Katanga and Bosco Ntaganda. What then is the ICC’s purpose in Africa if it cannot investigate a president over “aiding and abetting” some of these crimes?

By 2008, when UN investigators arrived in the DRC to look into crimes committed before 2002 – when the ICC has no mandate – more than 5.4 million Congolese people had died in the 10 years since a rebel group called Rally for Congolese Democracy (RCD) was formed to loot the Congolese minerals that make the mobile phone you may be reading this on.

In 2010, the UN published a 550-page report calling for the creation of a Congo tribunal to try 617 international allegations involving, among others, troops under President Kagame’s command in the DRC. That recommendation was ignored. Because the victims are black?

Besides, creating an international criminal tribunal for the DRC to end the impunity fuelling the ongoing violence in Congo will involve Kagame. What will that mean for the UK’s immigration policy, and for the Commonwealth, whose leaders have just given Kagame responsibility for the club for the next two years?

Because of this impunity, RCD, which became RCD-Goma after Kagame and Museveni’s troops fought in Kisangani over diamond mines, rebranded itself as the National Congress for the Defence of the People (CNDP) in 2006. In 2008, on the day people all over the world celebrated the presidential victory of Barack Obama, CNDP troops executed 150 civilians, including 14 children, in Kiwanja.

A peace deal signed on 23 March 2009 saw the CNDP become a political party. In 2011, it failed to win a single seat in the parliamentary election, so the next year, CNDP took up arms again, with Rwanda’s defence minister General James Kabarebe as its leader, rebranding itself as M23.

There are 5.6 million Congolese people internally displaced across the country. Another 27 million people, including 3.4 million children, are “acutely food insecure”.

A 2011 US study estimated that 48 women were raped every hour. In 2017, UN investigators discovered 80 mass graves in the diamond-rich Kasai province. In 2019, the UN unearthed another 50 mass graves in Bandundu.

Where the victims of war are white, the ICC has already opened its own probe, its chief prosecutor has visited frontlines and sent its largest-ever field deployment and an international Ukraine war crimes tribunal to put Vladimir Putin in the dock is already in the pipeline.

Why then are the US and UK refusing to back the creation of an international criminal tribunal for DRC?